The Raunchy Return of the Slick!

The Slick will soon appear in the Ms. Megaton Man™ Maxi-Series. 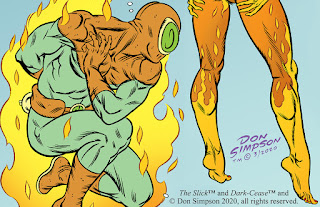 One of our favorite Bizarre Heroes is The Slick, a roof-running, stream-spewing, sticky-fingered megahero in the more perverse Steve Ditko tradition. With his prick-pistol brimming with Slick-Stick™ and always about to pop, our priapic protagonist starred in his very own issue (Bizarre Heroes #15, Fiasco Comics Inc., January1996), and was memorably parodied by Dave Sim in his Guys story arc in Cerebus the Aardvark #209 (Aardvark-Vanaheim, August 1996), who rendered more graphically the onanistic subtext of the character.

The Slick’s liminal adventures always bordered on the explicit (he was voted most likely to cross over with Wendy Whitebread, Undercover Slut), and his nocturnal missions more often involved fending off the groinal gropings of perennial groupie Mooncat or escaping the entangled restraints of predatory Rose Shark than fighting evildoers, strictly speaking.

An unpublished sequence from circa 1998, following his penultimate Bizarre Heroes climax, depicts an amorous encounter with Clarissa James, alias Ms. Megaton Man. However, when our boy follows Missy back to her lair, the contumely chimera turns out to be none other than Dark-Cease—one of the more fulminating femmes fatales among the evil Project Mainstream Megaclones—in disguise. In this newly-colored splash page, the igneous enchantress obviously desires Our Friendly Neighborhood Backdoor Surfer to douse her smouldering shunt-chute with lugubrious lubricant.

The Slick will soon be making his literary debut in an upcoming chapter of the Ms. Megaton Man™ Maxi-Series, as none other than the leading lady’s nyctophilic lover, in prose that promises to be the most purple yet in that barely-YA narrative experiment.

Catch the Sensational Slick’s upcoming guest shot in the prosaic Ms. Megaton Man™ Maxi-Series, the weekly serialized YA novel by Don Simpson! New chapter every Friday.
___________
All characters, character names, likenesses, words and pictures are ™ and © Don Simpson 2020, all rights reserved.
Posted by Donald E. Simpson at 1:03 PM No comments:

Teenagers at 25: Turgid Turtles from the Twentieth Century!

Here is the original art of two Teenage Mutant Ninja Turtles I created in 1989 and 1991. The first, "Teen Techno Turtle Trio Plus One," appeared in the trade paperback anthology Shell Shock, and the second, "Tales of Alternate Turtles on the Moon," parts 1 and 2, appeared in Turtle Soup vol. 2 no. 2, both from Mirage Studios, the originators of TMNT under creators Kevin Eastman and Peter Laird. Both cartoonists were fans of my early Megaton Man from Kitchen Sink Press, but Kevin especially patronized me for convention sketches in the summer of 1985 (much of the cash I made that year came from overcharging him for sketches of "Megaton Turtle" and the like), and he even did me the honor of creating a Megaton Man costume for Halloween that year and wearing it. 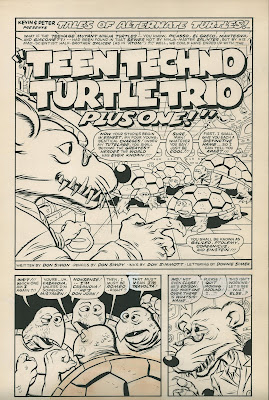 In any case I was invited to contribute to these anthologies, which were various creators' takes on TMNT. However, since I didn't really get the appeal of the Turtles at all (I never got the appeal of the late-'70s X-Men revival, either), I substituted my own group of snapper turtles led by a Jerry Lewis-like Nutty Professor mouse. The first story is noteworthy for introducing Pteranoman, my paleolithic take on Batman, who would soon thereafter get his own one-shot from Kitchen Sink, and later figure prominently in Bizarre Heroes. 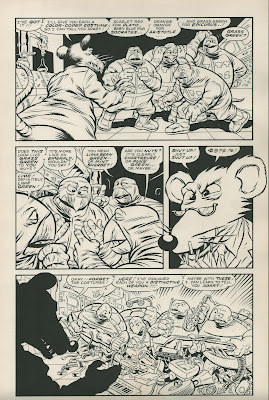 It is also features some pretty nice cave babes which likewise prefigure The Phantom Jungle Girl, who also made her debut in Pteranoman #1. It also features some inside jokes, such as Proffy's catch-phrase from Larry Marder's Tales of the Beanworld. The "real" TMNT and their rat guru appear at the tail (no pun intended) end. 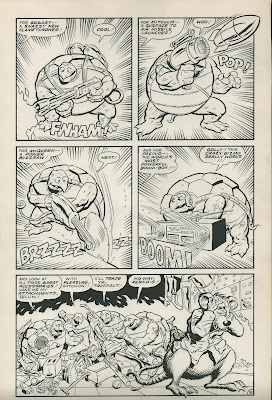 The second story appeared in color, and is a fairly generic pirate tale, with a very inside reference to Will Eisner and Wally Wood's Outer Space Spirit. It is noteworthy if only because I would later draw a "real" TMNT story for the Archie series featuring pirates. 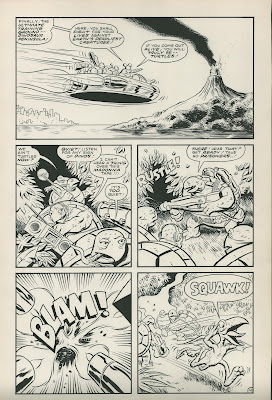 The copyright status of this material, as far as I am concerned, somewhat unclear. I will have to check my archives, but I honestly don't believe I ever signed a work-for-hire contract, or indeed any contract, for these stories (although I was well paid for the time). As the writer-artist, the Teen Techno Turtle Trio, or Alternate Turtles, if you will, belong to me, and I would probably be free to reprint or collect them, although I would no doubt have to obtain permission to reproduce the panels in which TMNT and Splinter appear, and since the property is no longer controlled by Eastman and Laird, how I would go about that is unclear. More likely I would have to alter those panels in some way. 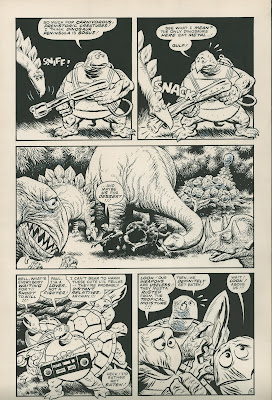 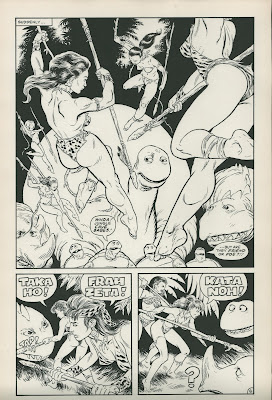 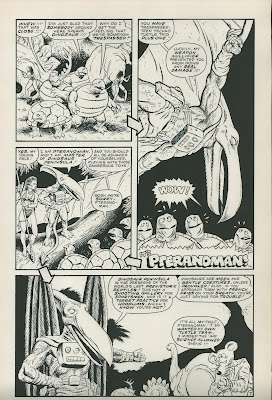 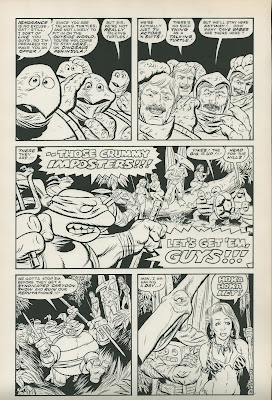 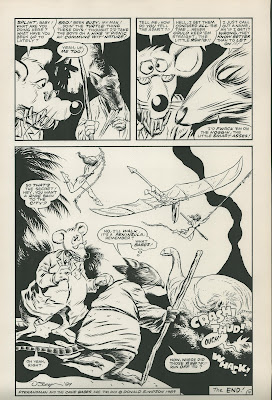 For some critical appraisal on the first and second story, see TMNT Entity blog. 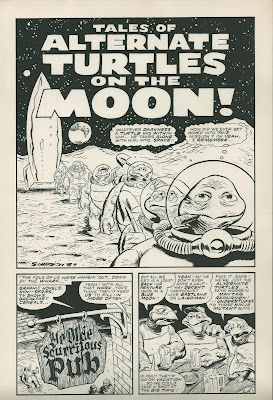 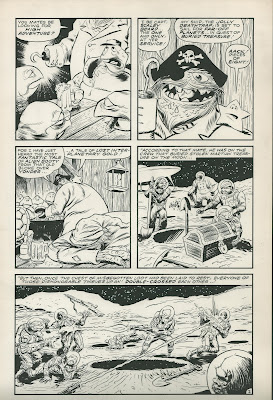 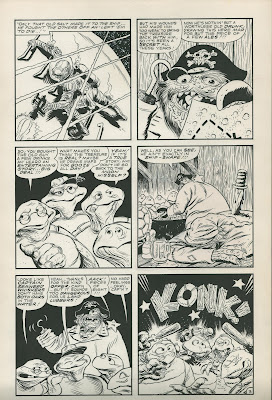 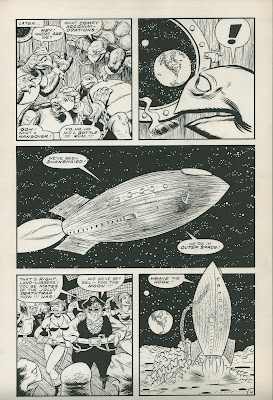 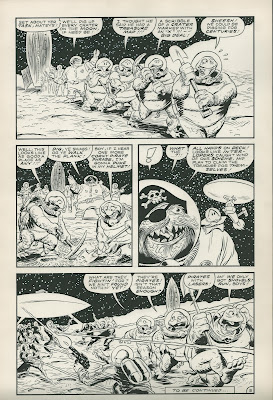 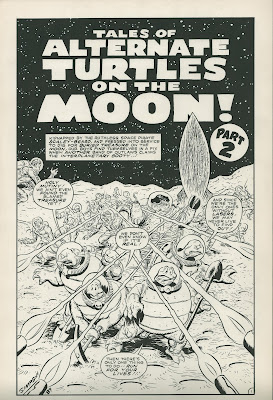 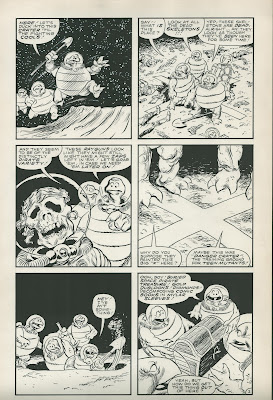 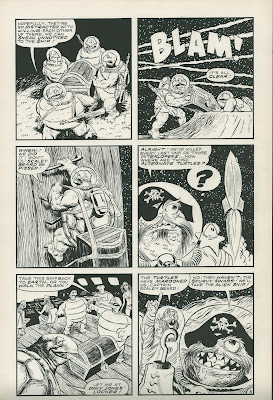 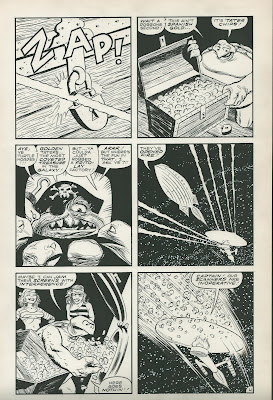 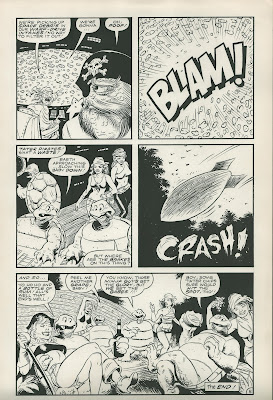 The original artwork, in any case, remains in my possession, and as complete vintage stories, might be attractive to some collector.

Here's the original note I received with the returned artwork from Mirage Studios; I have no idea whose initials are on it: 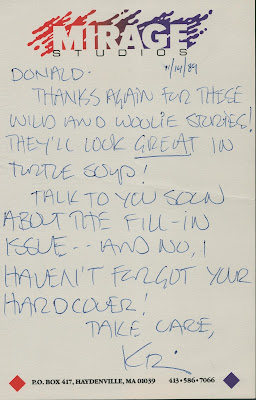 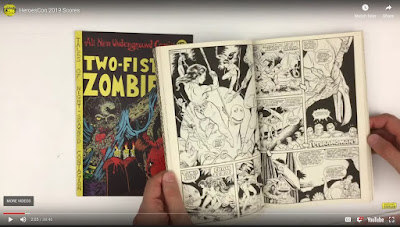 Fanny's Fanny and Other Sketches!

A mixed bag of some recent art, starting off with me swiping a piece of art another artist drew of my character! I was dumbfounded when I stumbled upon Bobgar Ornelas' winsome rendition of the Phantom Jungle Girl online; I had to see if I could capture that subtle body language and carefree expression. I still like Bobgar's version better!

Clarissa's legs are a bit too long here; more like a showgirl's (Ms. Megaton Man is only supposed to be about 5' 6"). Anyway, just a warm-up.

Simon Phloog (the Son of Megaton Man) and Gower Goose confront a Frog Girl on a floating disc; this was a sketch to help me visualize a scene and its characters that I am attempting to write in prose. More on that project another time!


Apropos of nothing, here is me at the easel at the 1993 San Diego Comicon, drawing Megaton Man and Fanny. I forget the occasion; presumably the piece was for a benefit auction. Who owns it now?!

Last but not least, I pay tribute to Whisper and Mars, two early 80s series that featured strong female leads! I got ahold of a few issues of each recently and used the inspiration as another warm-up!

Donna Blank, The Phantom Jungle Girl, first appeared without origin with her unlikely detective partners Cowboy Gorilla and The Brilliant Brain in absurdist one-act skit entitled "The Crypt of Crime" (Pteranoman #1, Kitchen Sink Press, August 1990) . I next used her as a substitute member of the Megatropolis Quartet (along with Rubber Brother) in The Savage Dragon vs. The Savage Megaton Man #1 (Image Comics, March 1993). Lithe and fun to draw, her over-the-top name seemed no more ridiculous than a great many "straight" superhero characters, and she seemed to navigate quite easily between my more melodramatic urban pulp-noir conceptions such as The Meddler and the more overtly humorous cast of Megaton Man. Fanny was therefore a natural to anchor Bizarre Heroes (Fiasco Comics, Inc., 1994-1996) as a Crime Buster and subsequently hang out with the Wandering VW Van in The Megaton Man Weekly Serial (online, 1996-2000), which established her secret identity as Donna Blank, the short-haired social worker who knows little about her orphaned past. Donna/Fanny will play a major role in my current work in progress: all-new Megaton Man material than I am preparing for publication in some form or another in the very near future. Here is a brand-new pose I created from scratch recently, along with some key panels from her past comics!

Get Down, Get Down: Weird Cultic Rites of the Bizarre Heroes!

Here is a recent commission I created for the discerning Bizarre Heroes connoisseur Mr. Douglas Rednour, featuring two of his favorite characters, The Phantom Jungle Girl and the Asp. Doug requested a dance or athletic theme (no doubt inspired by Ms. Megaton Man's recent exploits in volleyball, posted on her blog), so I had to through her into the mix. I decided on a choreographic theme, with our trio of muses gathered 'round that ancient twentieth-century device, the 45 rpm record player! Groove on, ladies!

If you would like your very own personalized, custom-made Don Simpson drawing,
please visit my commission rate page for some ballpark figures and contact me. Luxury you can afford!
Posted by Donald E. Simpson at 9:44 AM No comments:

The Most In-Your-Face Hero of All ... Spread Eagle!

Part two: More pencils and inks, this time all-new growth from April 2014, as I round out the story from a sketchbook fragment from 2003 (see previous post). Notice the little pieces of tape! 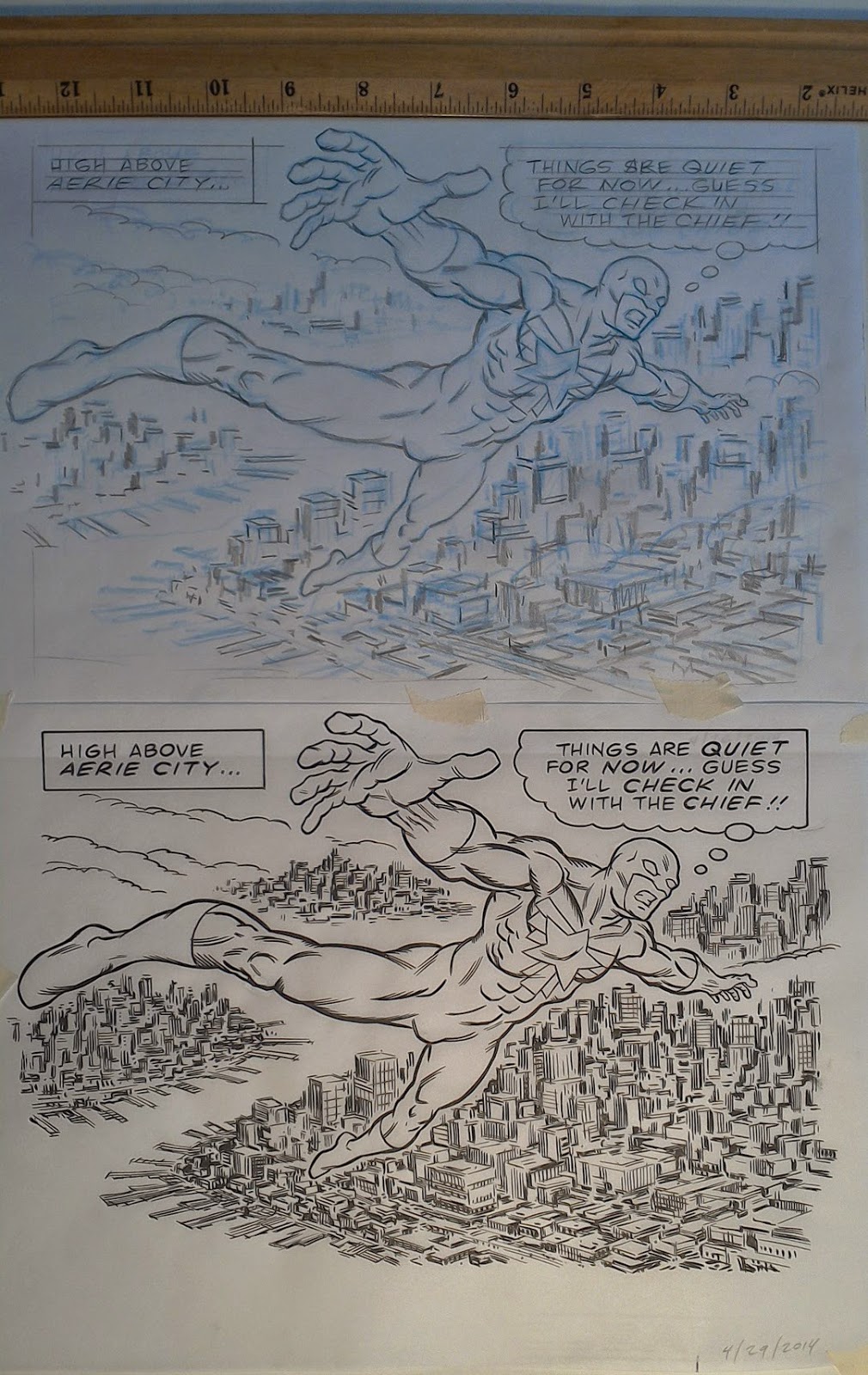 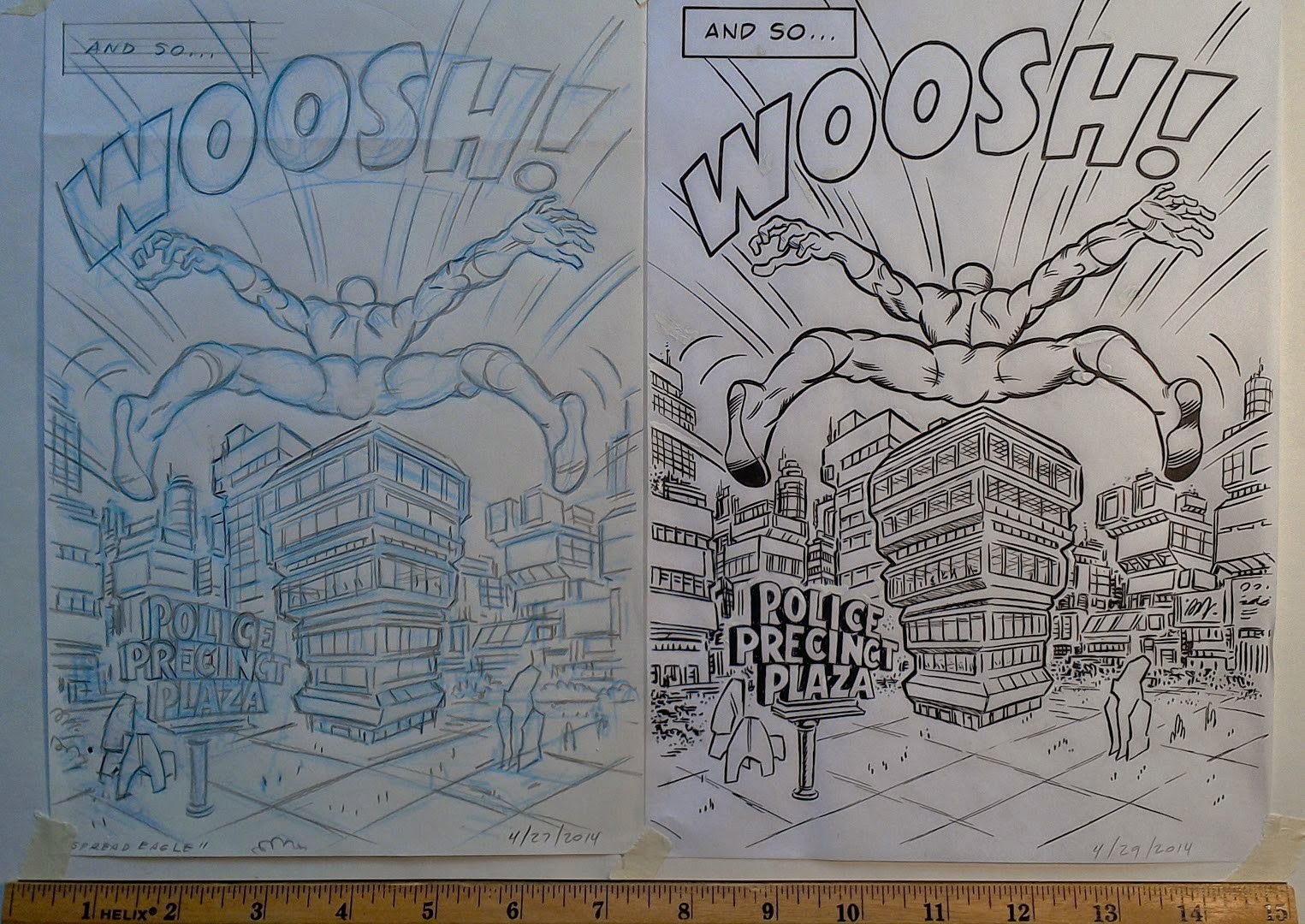 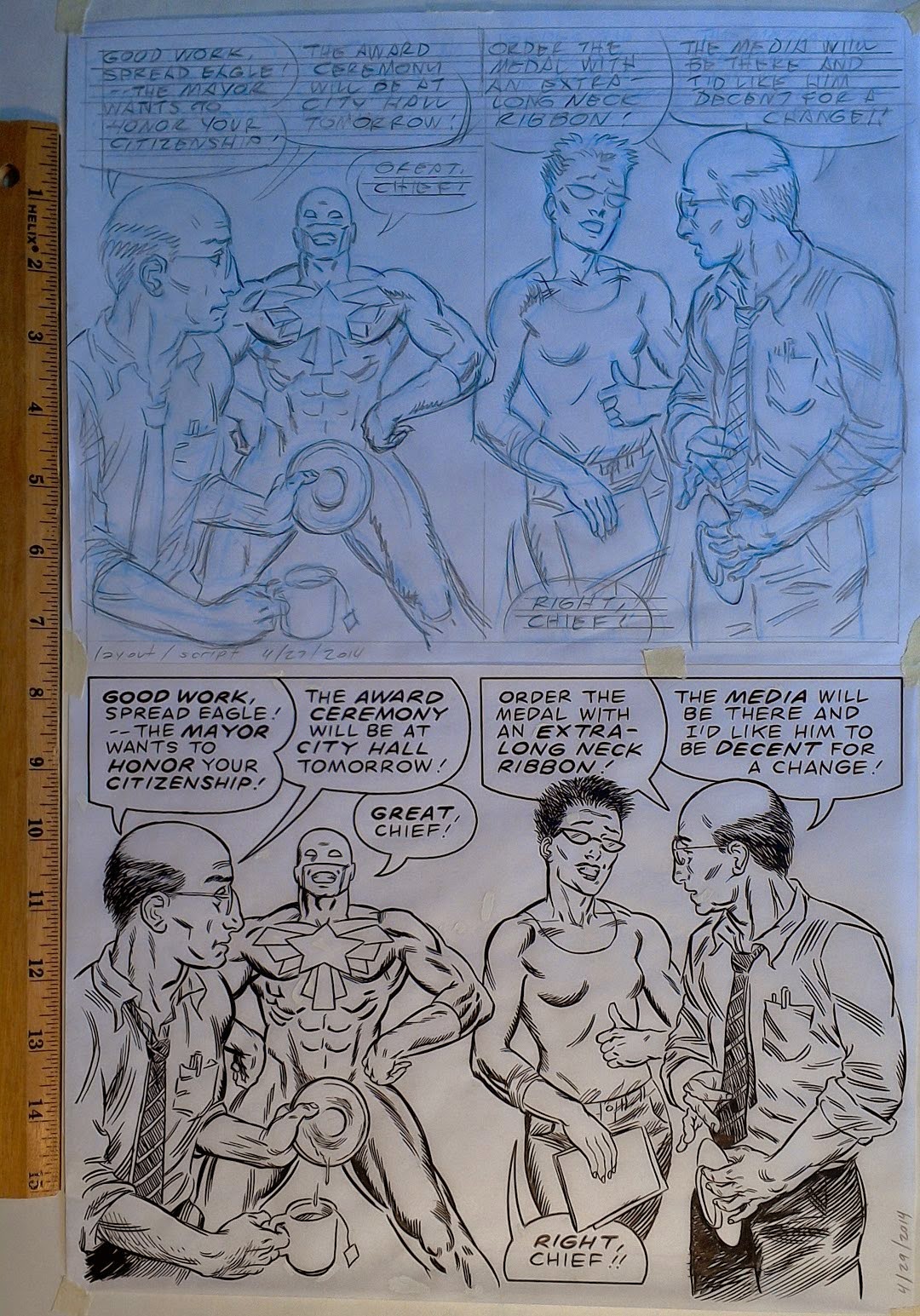 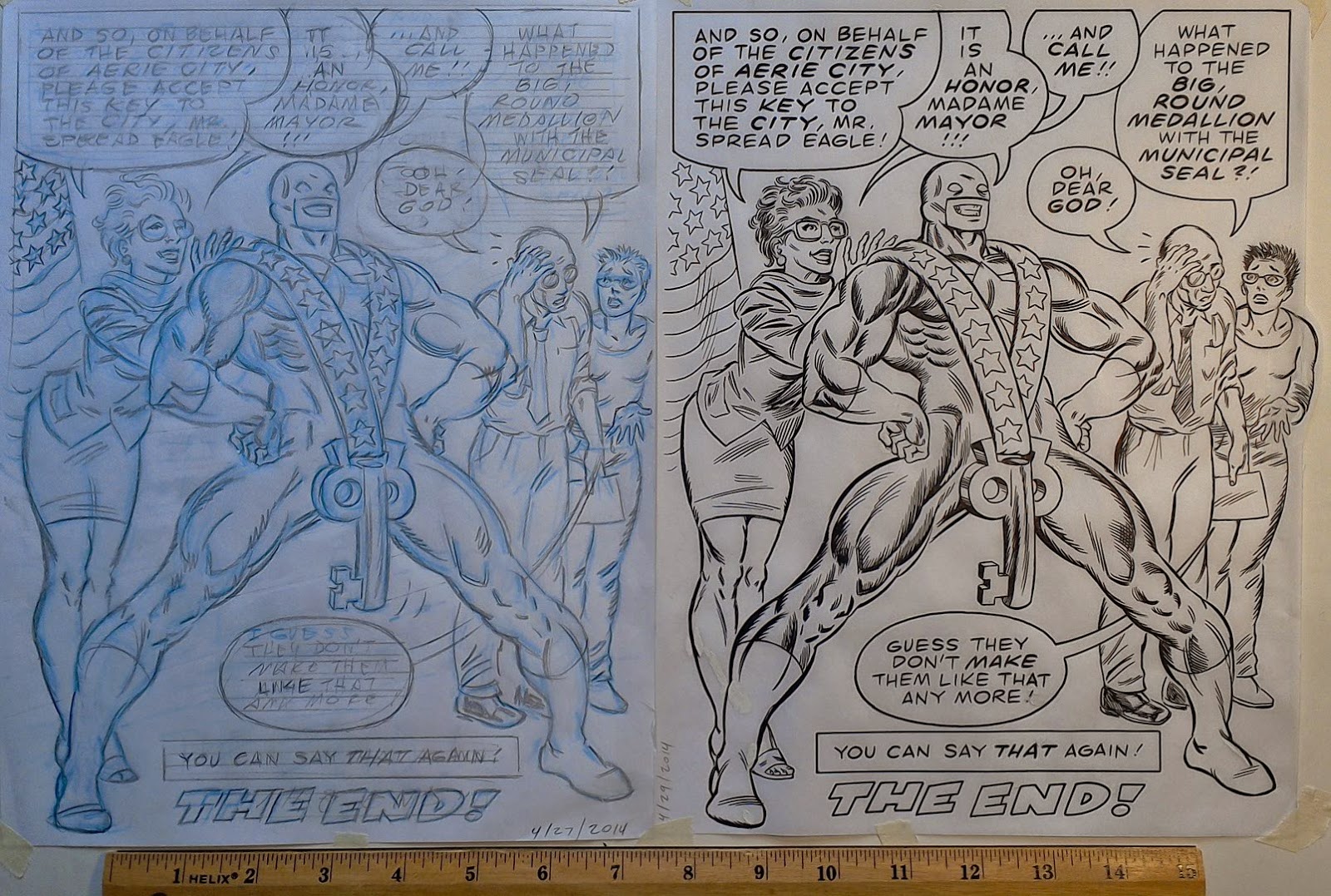 See more here!
Posted by Donald E. Simpson at 10:52 AM No comments:

The Spectacle of ... Spread Eagle!

From a 2003 sketchbook comes perhaps the most Bizarre Hero of all ... Spread Eagle! Below, the original sketchbook sheet and blow-ups lettered and inked in April 2014.

Donald E. Simpson
Don Simpson is the author of the Ms. Megaton Man™ Maxi-Series, a YA prose novel. He is the cartoonist and creator of the comic book and graphic novel series Megaton Man™, Border Worlds™, and Bizarre Heroes™, and of the international underground comix sensations Wendy Whitebread, Underscover Slut™ and Forbidden Frankenstein™ under the pseudonym Anton Drek, both of which have been translated into French, Spanish, Italian, and Finnish.

Don regularly reviews fiction and nonfiction books for the Pittsburgh Post-Gazette and teaches college writing and other skill courses in Western Pennsylvania. He earned his PhD in art and architectural history from the University of Pittsburgh in 2013.

Original and commissioned artwork by Don Simpson is available for purchase. Inquiries are welcome.

All characters, character names, likenesses, words and pictures are ™ and © Don Simpson 2020, all rights reserved.